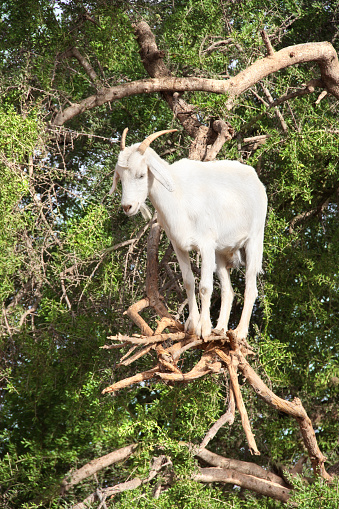 Posted by uniquemoroccotravel on April 3, 2022 | Featured | No Comments

When you explore the globe, you’ll come across a variety of fascinating creatures performing unusual activities and Morocco goats climb argan trees. Sugar gliders flutter in the air and quokkas cuddle up to guests on Rottnest Island in the hopes of getting some fresh greens from the Melaleuca bush tops nearby if you’re an animal lover. However, the rest of the globe has some fascinating animal situations as well, such as Morocco’s tree-climbing goats.

Why Do Moroccan Goats Climb Trees?

You could see goats hanging out on the limbs of Morocco— or argan — trees, chowing down on some green or brown bean-like fruit as you drive across Morocco. Many animals would avoid climbing the tree since it is spiky and has thorns, but these goats are in it for the sweet fruit. In reality, the cloven-hooved youngsters are persuaded to climb by their love of the fruit.

Acrobatic goats eat the fruit and leaves of argan trees in southwestern Morocco. A tree crowded with goats is a stunning sight, but the goats’ often-overlooked habit of regurgitating and spitting out the nuts might be crucial to the forest’s survival.

Goat herders shepherd their herds through argan (Argania Spinosa) woods, where the animals can scramble up to ten meters high trees and strip naked. According to popular belief, goats defecate argan fruit nuts, which may subsequently be extracted from the goat’s dung.

The first stage in producing argan oil, a significant export to wealthier nations for use in cosmetic items and foods, is to crack these nuts open. The fruits can be harvested directly by humans, but goats save them a step.

“Some scientists have embraced the feces concept, mainly because they didn’t talk to the herders,” says Miguel Delibes, a biologist at Seville’s Diana Biological Station.

The goats, according to the herders, spit up the seeds in the majority of cases.

Delibes and his co-authors state, “Goats do not normally excrete huge seeds.” They were skeptical that argan nuts, which are around 2.2 cm long, would go through the animals in this manner.

As a result, they fed olives, hawthorn fruits, and carob tree pods to Spanish domestic goats. Because the tree does not grow in Spain, the researchers were unable to get argan fruits.

Despite not being able to discover all of the seeds afterward, the researchers were able to recover spat-out seeds from every species of fruit, according to the authors. The biggest seeds, which were still smaller than an argan nut, were the ones that were most likely to spit out. Seeds that were smaller ended up in the feces more often.

The rumen, the first of four stomach chambers, receives food swallowed by a goat. The goat regurgitates material — the cud — from this compartment for additional chewing, much as other ruminants like cattle or deer.

Because Morocco goats chew their meal numerous times, “the duration in the rumen is quite variable,” Delibes notes. An ingested seed might be vomited out by the goat hours or days later – up to six days in the research.

Researchers examined the viability of regurgitated seeds and discovered that more than 70% may still sprout. As a result, spitting goats might be an underappreciated ecological component, aiding in the dispersal of plant seeds.

Researchers previously knew tropical grazers could spit seeds in their cud, but this study suggests that temperate ruminants’ spit might be essential as well, according to Delibes. In fact, he believes that all ruminant animals, wild and domestic, do the same way.

Seeds distributed by spit may be missed by an ecological study that concentrates on animal excrement, particularly seeds that wouldn’t survive a passage through the intestines.

Argan nuts spat up by goats account for up to 60% of the nuts used to create argan oil, according to Ahmed El Aich of Morocco’s Hassan II Agronomic and Veterinary Institute in Rabat. “Farmers utilize goats to pick argan nuts on purpose since some argan are extremely remote from habitations,” El Aich explains. He also points out that the arrangement is not without risk: some Morocco goats break their legs when they fall from the trees. Book your 3 days tour from Marrakech to Fes.